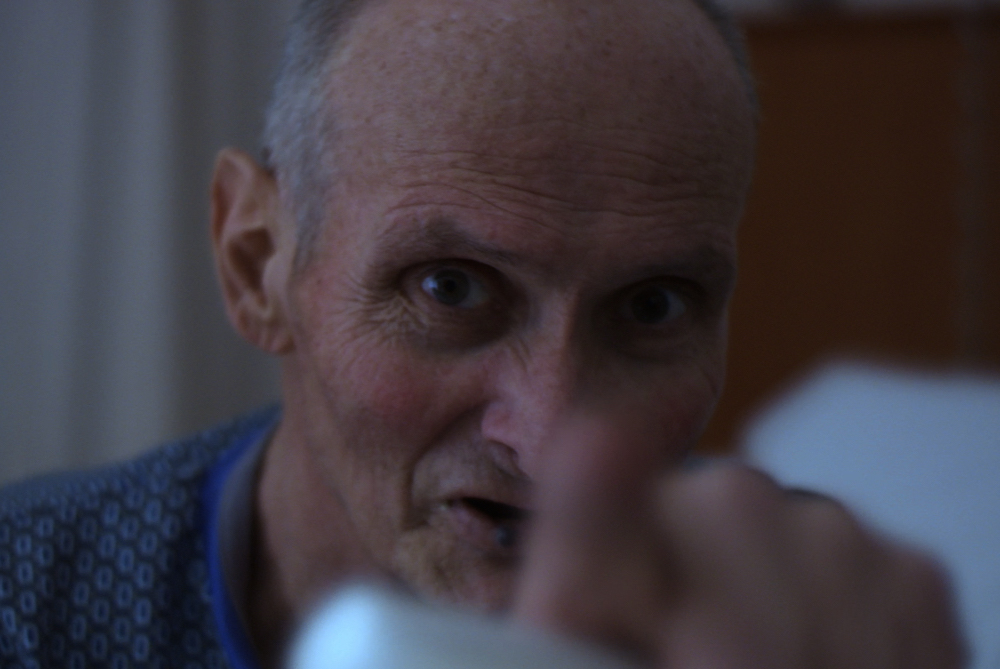 “Don’t you think to have added pain to an already painful situation, violating the intimacy of the patients’ rooms with the camera?” a lady asked me, after a screening.

I often think of that question. Who says the protagonists get used to the camera lie, or is simply wrong, because the camera and the crew are not invisible; they modify relations and take away space and intimacy. The question, however, concerned “added” pain.

Did we really add pain? Mario, one of the protagonists, swears not. I’ll tell you how it went.

Before shooting in the hospice Casa Madonna dell’Uliveto, I prepared for two years. I found a perfect protagonist, a  palliative practinioner of great humanity and creativity. Unfortunately, few days before shooting the doctor told me, with great pain, he could not take part in this project. He was burned out.

He used to clear his voice constantly, as if trying to reassemble it, but the sound came out more and irreparably broken and his eyes were moist, shining with melancholy. He was so exhausted not to even hold the weight of the happiness for the arrival of a niece.

I calmed him down. I began to wander through the rooms, on tiptoe, to see if there were patients willing to stay with us. It was Easter.

I went and introduced myself to an old and grumpy gentleman, Ivano.

We talked about everything for the entire afternoon. He seemed fine, but he had frequent coughing attacks. He twisted his mouth, then he gave a cough and drank from the straw some drops of water and mint, not to feel the bad taste that the chemo had left him. He cleared his voice and then, he started to talk again. He was like a raging river.

I came back the day after and then again. Despite his gruff, I felt at ease with him, as we were speaking the same language. He was one of the hill, I was one of the countryside. No wonder it was so direct, no-nonsense, in communicating.

It was then that I asked him if he was willing to be filmed. “What is your film about?” He asked. I remained vague, because there were words I did not want to pronounce: “… of everyday life in the hospice, to help people not to be afraid,” I said.

Hospice had given me a great access, but I had to respect the patient centrality and I could not do anything that would have disrupted the so fragile balance. I could stay in the rooms only if the patients wanted me to stay there and I could not talk too much because I did not know what they knew about their condition.

I should not reassure, I should not investigate the state of health, or promise nothing I could not keep, but most of all I had to be silent, in a listening mode, guided by the patient. It seemed impossible to me to shoot a film in these conditions, above all without ever leaving those rooms, but there was no alternative.

It felt like there was an agreement, and I was almost certain he would have accepted.

Then he said: “No. There I don’t want to be in this film. Too sad”. This ended up the question.

The day after, I had to meet a lady that wanted to be in the film, Meris. Her daughter was with her. Meris was a very thin and tiny lady, with short hair. She looked very distinguished.

The hospice staff was completely in love with her. She was a woman who knew how to make you love her, so that her schedule of visits was full of reservations for the entire month, and we were just at the beginning. I also met her husband, Mario, a very nice gentleman, always ready with a joke and a surprising delicacy. This woman was a catalyst of fabulous people.

She was excited to be in a movie. She forced her husband and daughters to bring to the hospice sweaters and very elegant and colorful shawls. We began shooting and I did not meet Ivano for a couple of days. The psychologist told me it was as if Meris, with the film, gave herself up to eternity, but not for vanity.

One day, Ivano saw me going into the hallway and yelled at me: “Director!” I stopped and went to greet. He said, “Where have you been? I waited for you during these days.” I explained to him that a lady, much nicer than him, had agreed to be our protagonist. Then he turned serious, he thought for a bit and defiantly told me:

“Come on, ask me now if I want to be your hero, let’s see what I answer you today.”

Ivano smiled to me, with such a big smile that his face lit up as I saw only one other time in those days.

I had found my protagonists, or rather, they had found me. Ivano, the gruff, and Meris, the sweet, two people who could not be more distant than that. He was in the phase of rage and she was in acceptance of her destiny, but every time wondering why.

No, we never added pain.